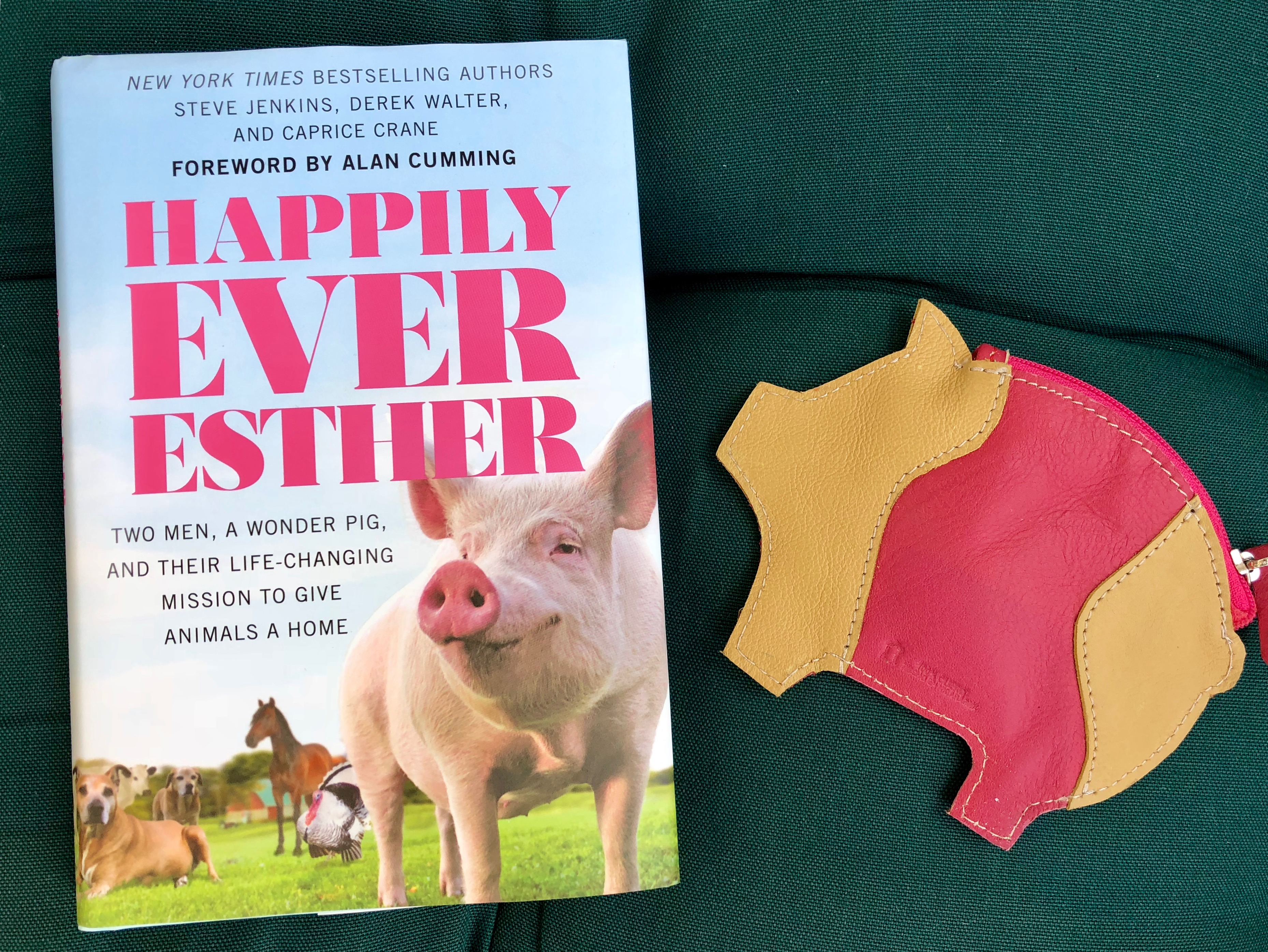 Happily Ever Esther by  Steve Jenkins + Derek Walter ♥ ♥ ♥ ♥ Retails for $18 on Amazon. Best read paired with a plant-based meal, like this yummy black bean burger that I eat at least once a week or this vegan banana bread that’s become a family favorite!

Teacup pigs – and miniature animals – have been trendy pets. The appeal is definitely there. Just think how fun it would be to cuddle up with a tiny pink piglet on your white fluffy blanket in front of the fireplace when you get home from work? Not only does it give you Winnie the Pooh vibes, but it saves you from being the boring owner of a more cliche pet – like a dog, cat or even fish.

The authors of Happily Ever Esther wanted in on the trend – and decided that a teacup piglet was going to be the newest addition to their family. Except, it didn’t take long before they realized that their cute and tiny little piglet, named Esther, would soon turn into a 700 pound pig. That’s where the story gets interesting.

As this little piglet starts growing up, her dads fall in love with her as if she were their daughter. They connect with her personality, know her different moods and even figure out how to make her comfortable when she’s on her period. She teaches them that all animals deserve to be loved and that they have the capability of loving right back. As the title gives away, as a happily ever after, these dads both go vegan and raise enough money to start their own farm sanctuary. This book is the story of the day to day experience that they have with the animals there.

If you’re a vegan, vegetarian or pescetarian you know that there is a line for when and where you can advocate for the animals you are saving by not eating meat. This diet and lifestyle is not something that can be pushed onto other people, which is something that becomes incredibly frustrating to remember and bite your tongue when certain know-it-all personalities start talking about how without meat you couldn’t possibly get all the protein you need… but I digress. Instead, it takes a delicate balance of information and a non-judgemental candor to really open someone’s eyes on the reasons someone might give up meat, no matter how delicious it may taste to them.

This is something that impressed me about Happily Ever Esther – never did the authors shame people who ate meat or “vegan-splain” the importance of animal rights by listing the violence innocent, sentient animals suffer so we can have something on our plates. Instead, the book simply tells the story of a couple who started an animal sanctuary, explaining the different personalities of each animals, the challenges they face on a daily basis, and casually sneaking in different ways people can get more involved in helping the animals in their communities and even helping them by becoming more conscious of what they are consuming.

For me, my journey of becoming a vegetarian started because I had my younger sister to look up to – she’s been vegetarian since she was eight years old, and recently went vegan this past winter. I’d admired how she was able to switch up her lifestyle and give up so many flavors and convenient foods for the sake of saving animals and the environment. Yet even though hearing her talk about the consequences meat and animal product consumption has on our world – and on the individual animals that we take so much from, was helpful and definitely something I thought about from time to time, it was not until I was able to realize first-hand that animals were sentient beings that I took the leap in my own life to cut out meat – that same day. 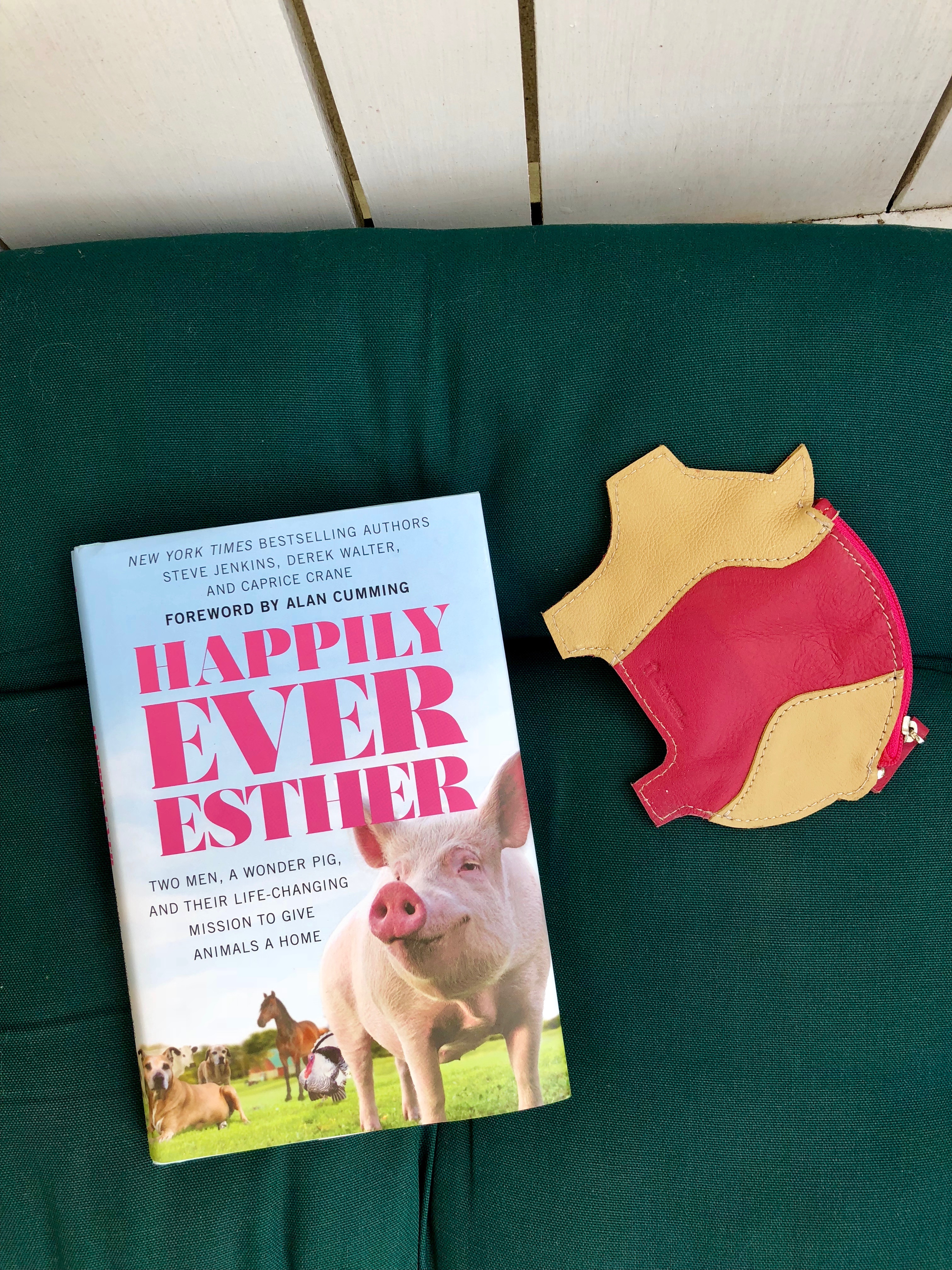 I can tell you first-hand as someone who used to eat meat every day and LOVED the taste of it – I never would have thought it would be possible for me to have quit it cold turkey (lame pun intended). I decided to try it out for a week and see how it went – but because I lost my cravings after just a week, and now every time I see a piece of meat I know what happened to the animal in order for it to get on that plate, I don’t have a craving to eat it. It’s been 11 months since I last ate meat and I’m so proud of myself! (Don’t worry, I’ll do a meatless anniversary post next month with my full story!)

Whether you’re thinking about switching your lifestyle, or simply have an interest in animals, this book is worth the read. It will put you in the shoes of two dedicated men on a mission to promote compassion towards animals, who run an animal sanctuary and happen to have a 700+ pound pig cohabit their house with them. It’s a real-life Charlotte’s Web. Though the animals don’t necessarily talk their personalities shine through the descriptions of their behavior in the text, and you can start to tell how unique each and every one of them are… just like us.