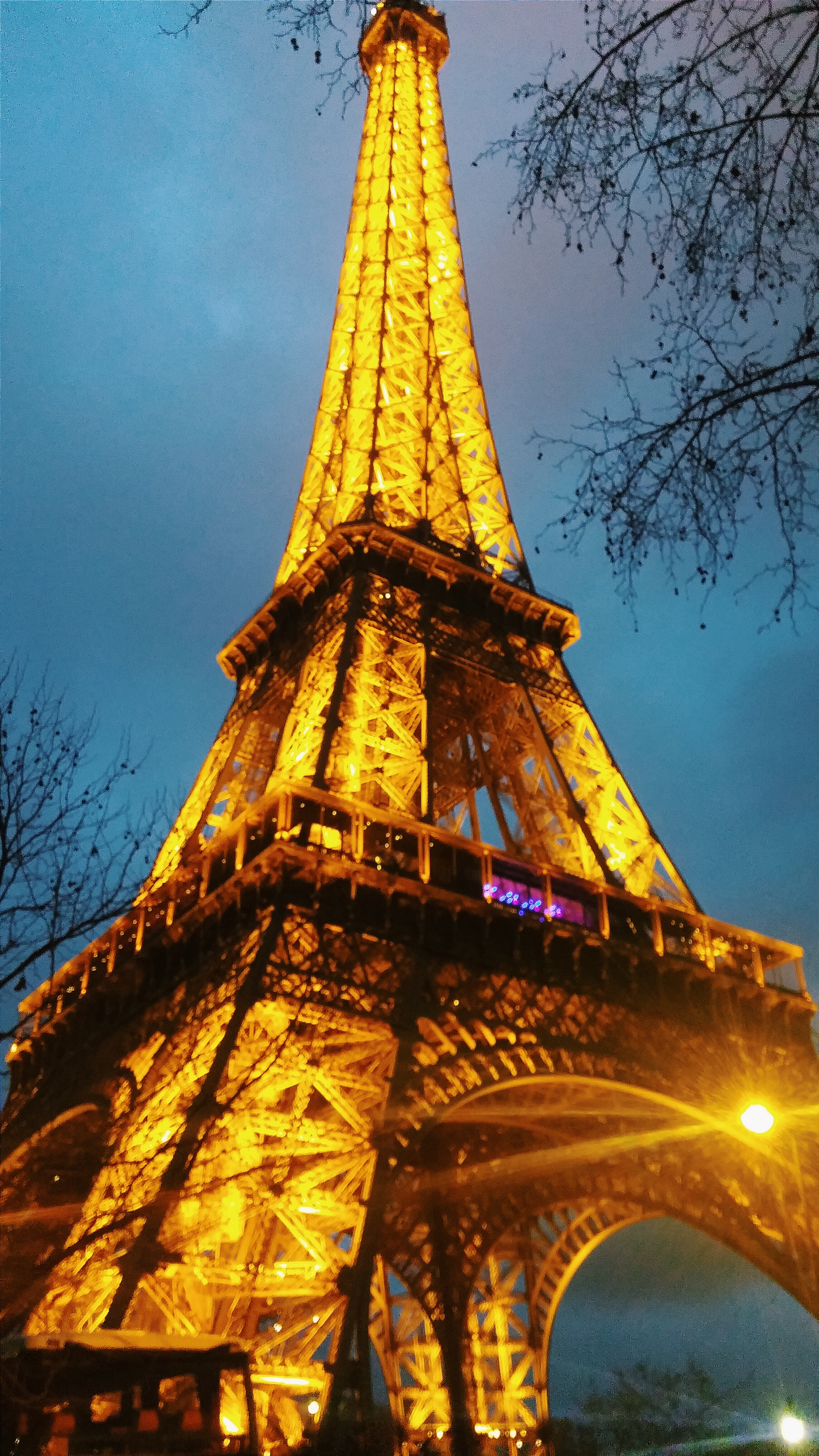 Actually, in a few hours it was time for us to head down to the pier for a boat cruise with crêpes and champagne. (Does life get any better than this !?) The Eiffel Tour was most definitely looking down on us in approval. This was so much fun and we learned a lot about the beautiful sights we were passing from our tour guide. 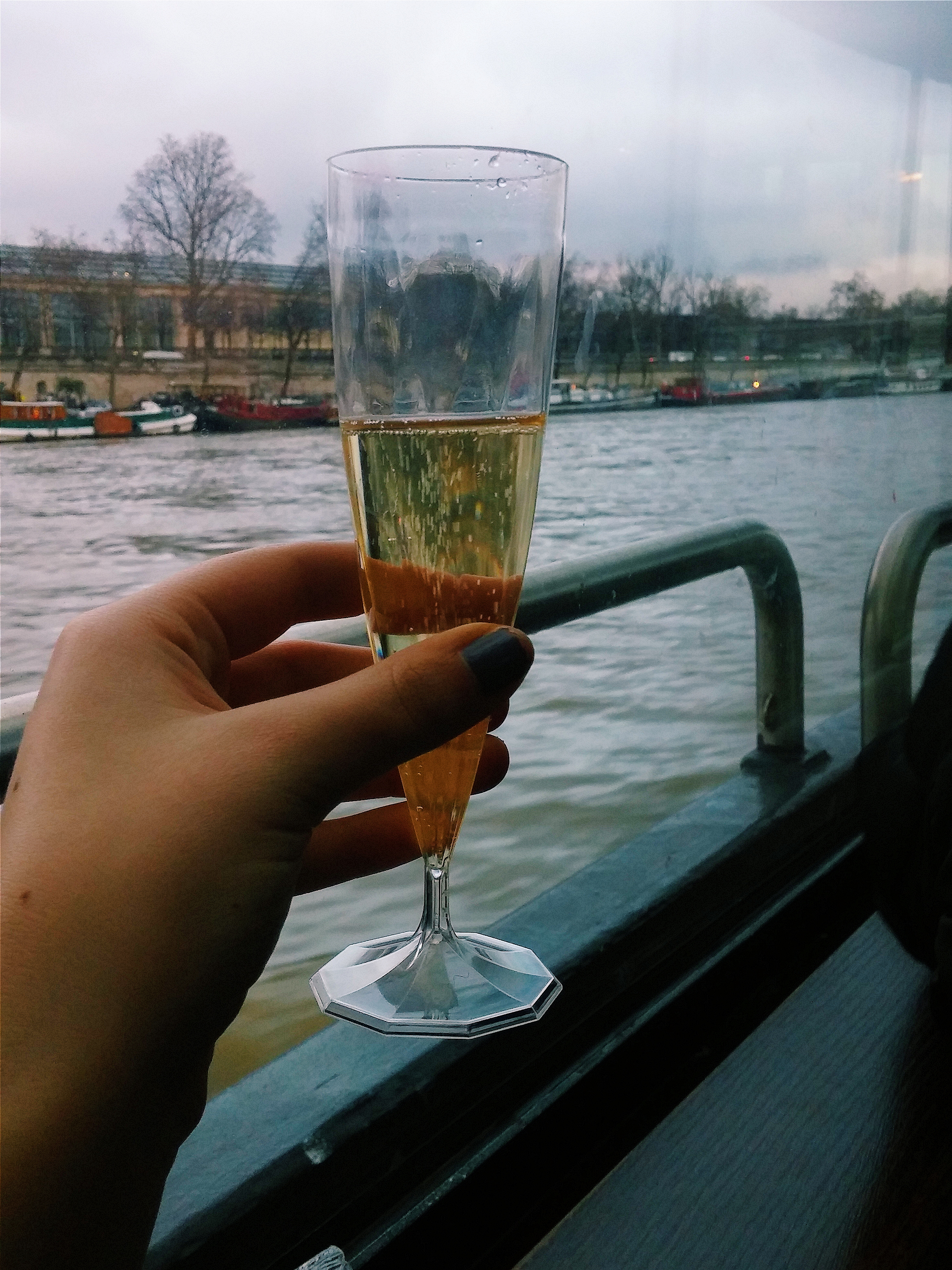 We had planned the Seine cruise to happen around the time of sunset, yet halfway through the tour it was still bright and sunny and I started to wonder if we would get to see the city at night from the water after all.

Luckily, this worry was simply due to my own impatience and desire for things to go exactly as planned because it soon became dusky, and as we pulled into the dock we could see the Eiffel Tour putting on a brilliant shimmery glittery light show… an adorable energy that made me so incredibly happy and in love with the city !

We exited the boat, our bellies full of crêpes and champagne, and headed straight for the beautiful lit up Tour ahead of us. Being so close to the Eiffel Tour was an incredibly surreal experience for me. It was something that I’d kept figurines of since I was little and associated with faraway magic.

Even though it sounds a bit cliché, having the chance to see it in person – and its wonderful light show! – was kind of a life changing experience for me. It made the world seem so much smaller, in a good way, and more reachable. Here I was standing next to something that had seemed so distant and out of grasp. It was just one of those moments that reminded me how amazing travel is for our minds and souls. It really expands the boundaries and limits that we place on ourselves and on a personal level, it pretty much signaled a switch in my mindset about some of the things I have been struggling with the past few months. We all have this beautiful vast world to live in and we can either make the most of it and be happy or miss out on the wonderful experiences that are within our ever-reaching grasps. In the words of DVF, “You carry the passport to your own happiness.”

After taking (not nearly enough) photos with the Eiffel Tour, Ben and I continued on our way in search of dinner. As is to be expected, all of the restaurants and cafés in the area were astronomically priced, so we walked further into a more residential area of the city. We stumbled upon an adorable looking Italian place, L’Atelier 197 on Rue de Grenelle and had the most delicious spaghetti carbonara and a half bottle of French wine. The meal was so good that we debated making a reservation for the following evening, Valentine’s Day, but then realized that we had yet to eat at a French Brasserie and really shouldn’t eat at the same place more than once when traveling (a rule we unfortunately broke when in Spain, but I digress…).

Our next stop for the night was back to where we started our day! On the Paris museum pass booklet we purchased at the Musee d’Orsay we saw the option to do certain museums at night, one of which was the Louvre ! This was a fantastic option because once we got back to the Louvre Palace we barely even saw a line to get in. We waited 5 minutes, showed our pass and entered the Louvre as easy as that. 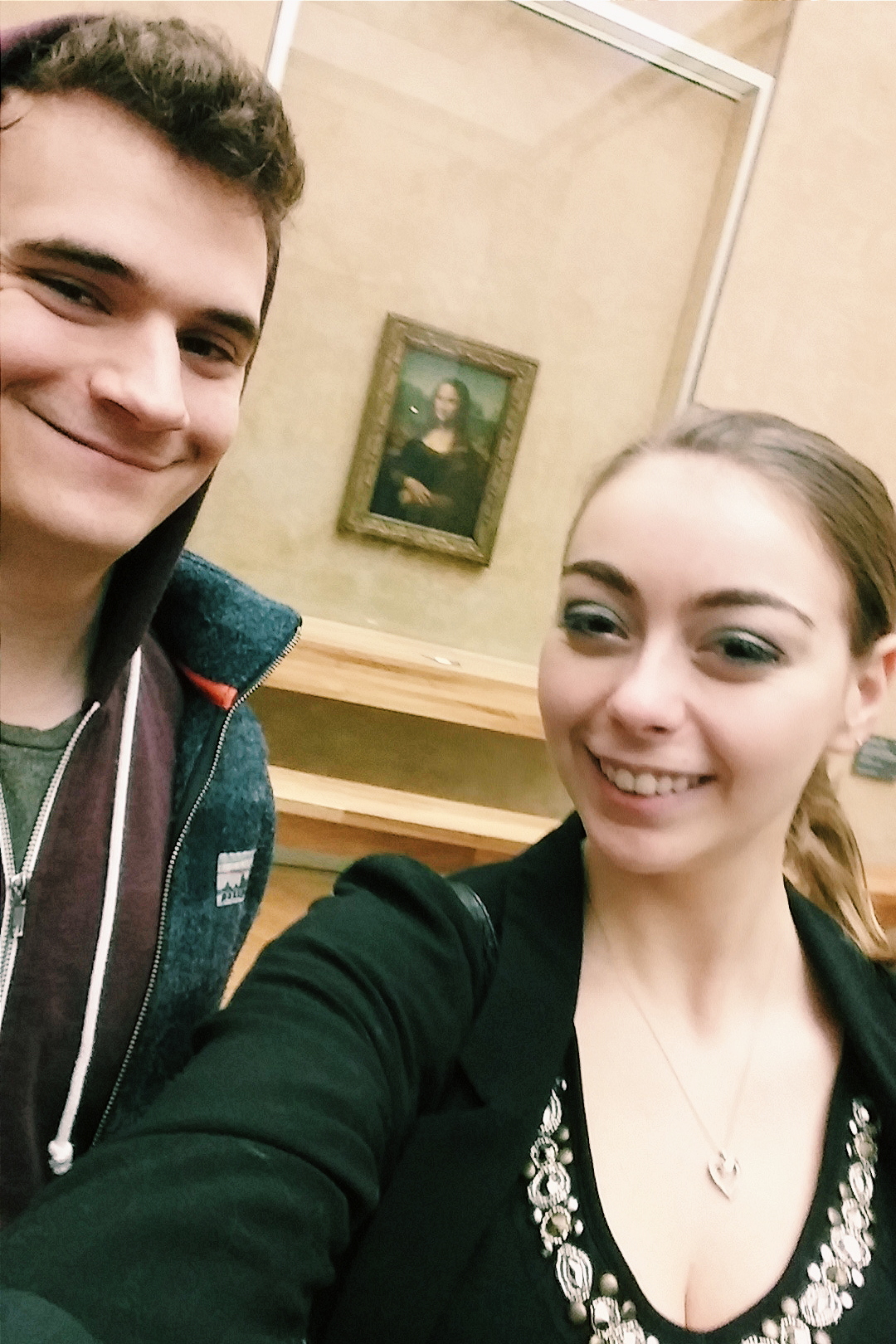 Our first stop was, of course, the Mona Lisa. By the time we arrived the crowd had dwindled down and we were able to stand front and center… again incredible ! It was innately clear why it is such a masterpiece, and yes, she is always watching you no matter where you stand… creepy. We then spent the rest of our time admiring the works of Italian and French artists until the museum closed for the night. I also fell in love with the details of the ceilings in what used to be the Louvre Palace dining hall.

More than halfway through SEVERANCE now and there